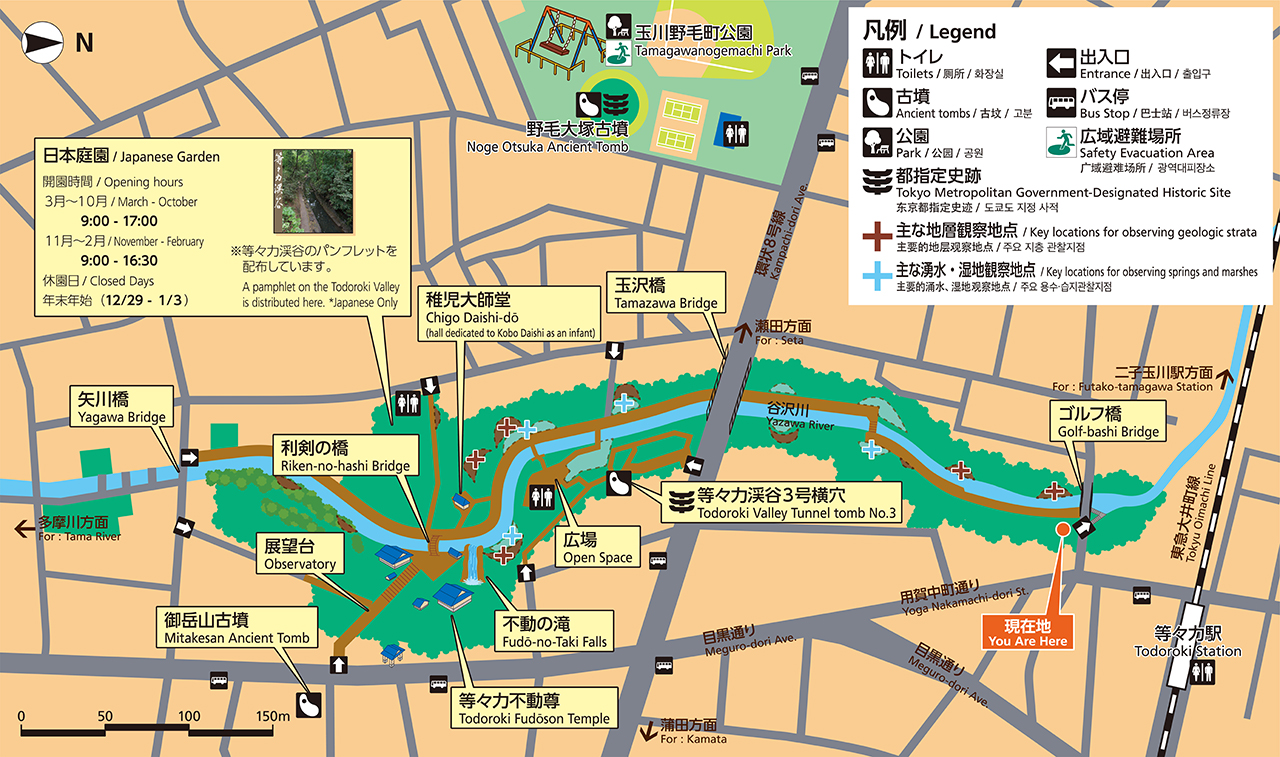 The Todoroki Valley was created as the Yazawa River eroded the southern tip of the Musashino Upland. With an extension of approximately one kilometer, it is the only valley in the 23 cities of Tokyo. Walk down the steps by the Golf-bashi Bridge over the Yazawa River, about a three minute walk south from Todoroki Station on the Tokyu Oimachi Line, and there is a walking trail on the riverside heading downstream.
The valley is cool even during the summer under the luxuriant growth of Japanese zelkova, bamboo-leaf oak, konara oak, Japanese mountain cherry, and other trees, and the sound of the river and the wild songbirds, while water bubbles up from springs everywhere. Nature embraces the visitor, making it hard to believe that such a place exists within the metropolis.
Further down the walking trail, past the Tamazawa Bridge on Kampachi-dori Ave., the Todoroki Valley Tunnel tomb No.3 appears, a tunnel tomb built between the late Kofun period and the Nara period (about seventh century). Further on, at the southern tip of the valley are the Japanese garden and shoin-style drawing room building, as well as the Todoroki Fudoson Temple, which is renowned for its cherry blossoms.
In the valley below the Fudoson is the Fudo-no-Taki Falls, where people have been coming from everywhere throughout history and still do today to stand beneath the waterfall for ascetic training. According to legend, the name Todoroki is derived from the roar, or todoroita, of the ringing sound of the Fudo-no-Taki Falls in the valley.

The Todoroki Valley and its environs were designated as a Tama River Scenic District in 1933. Subsequent work on riverbank protection and creating promenades as part of Tokyo Prefecture’s green space planning was completed in 1936. It was designated in 1957 as a scenic district park by the Tokyo Metropolitan Government as part of its urban plans, and preparations took place between 1961 and 1964. Part of the area along the valley formed the core of Setagaya Ward Todoroki Valley Park, which opened in 1974. More areas were purchased and prepared under the urban plans; today, the park covers more than three hectares.
In March 1999, 3.5 hectares of the valley environs including the Todoroki Fudoson Temple were designated as a Place of Scenic Beauty under the Tokyo Metropolitan Government Ordinance for the Protection of Cultural Properties.

WATER AND SPRINGS IN THE VALLEY

The Yazawa River, which created the Todoroki Valley, begins in Kamiyoga 6-chome and flows through Yoga and Nakamachi. As it nears Todoroki Station, it begins to form the valley, where it is later joined by the Fudo-no-Taki Falls. Further downstream, some of the water flows into the Rokugo irrigation canal (Maruko River) while the rest joins the Tama River. The water received from the Sengawa Water Purification Plant since 1994 has improved the water quality of the Yazawa River.
There are more than 30 springs in the Todoroki Valley. Some of this water collects in depressions to form marshes.
The Yazawa River’s water quality improves as it goes downstream from the Golf-bashi Bridge, indicating that the spring water joining the river significantly enhances the quality and quantity of its water.
The spring water from the Todoroki Valley was designated as one of “Tokyo’s 57 Best Waters” by the Tokyo Metropolitan Government in 2003. 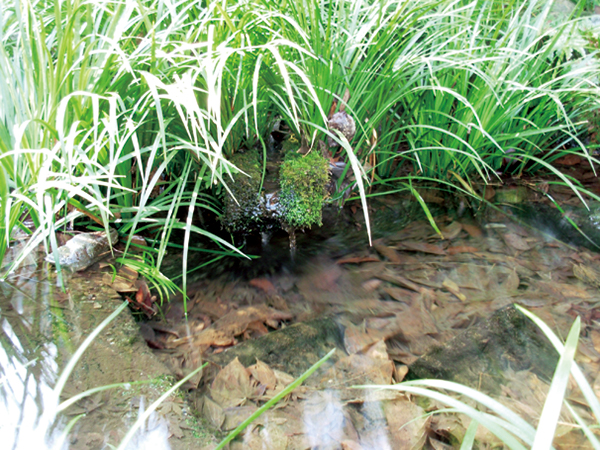 The flora of Todoroki Valley consist of a bamboo-leaf oak community and a Japanese zelkova sub-community that form a continuous woodland along the ravine valley slopes consisting mainly of large-diameter trees. The slopes of the scarps are mainly populated by the bamboo-leaf oak, Japanese zelkova, and scabrous aphananthe, while the upper part of the slopes and the plateau are much covered by the Yedo hornbeam and konara oak. Grass-leaf sweet flag grasslands can be seen on the flat slopes where spring water flows down, while wetland plants dot the areas where the spring water accumulates. 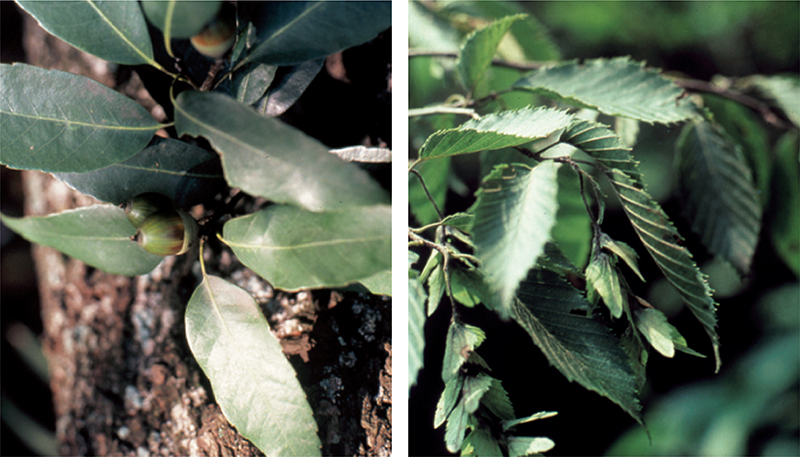 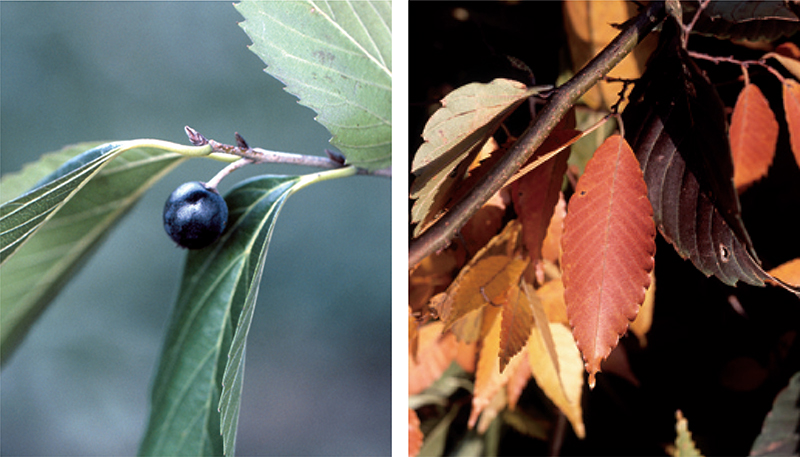 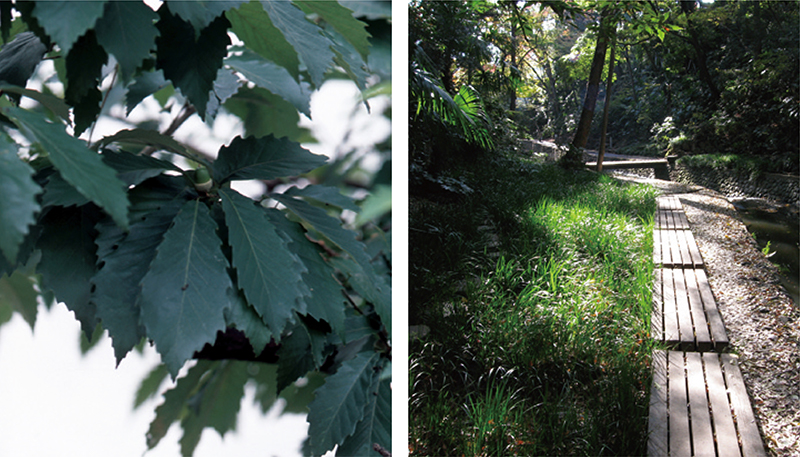 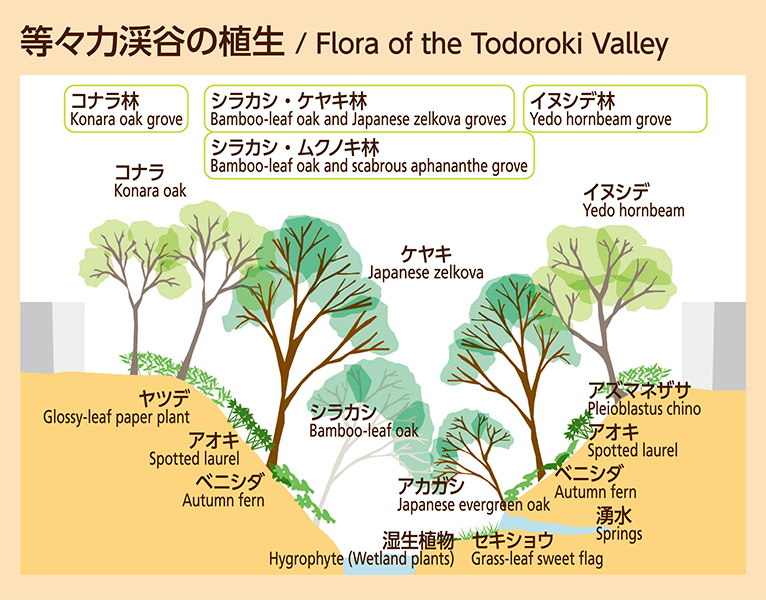 The Todoroki Valley is located on the southern tip of the Musashino Upland, a dissected valley created by the erosion of the plateau surface. There are places along the ravine valley where the cross sections of the geologic layers that characterize the Musashino Upland can be clearly observed. The layers are laid out in near-perfect horizontal form, from bottom to top: the Takatsu alternating layer of the Kazusa layer group, which forms the foundations of the upland, and the Shibuya clay layer, Musashino gravel layer, Musashino clay layer, Tokyo pumice layer, and loam layers (Musashino loam layer and Tachikawa loam layer) that have been deposited over it. There are many springs bubbling up from formations between the Shibuya clay layer and the Musashino gravel layer.

The bridge at the entrance near Todoroki Station on the Tokyu Oimachi Line is called the Golf-bashi Bridge. This name has its origins in a spacious golf course covering approximately eight hectares developed in the early Showa era by Tokyu Corporation, the railroad company, in what was then Shimonoge. The current bridge is a steel arch bridge built in 1961 to replace the original wooden bridge. 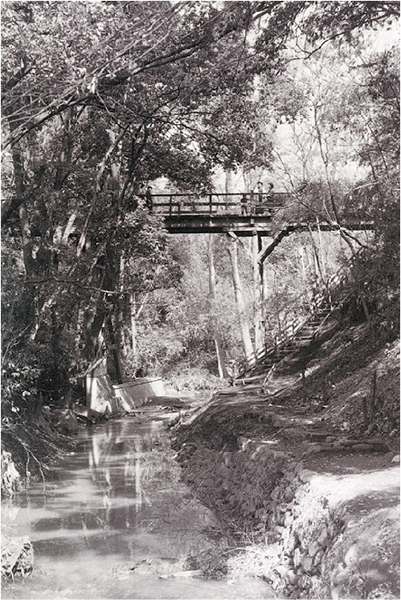 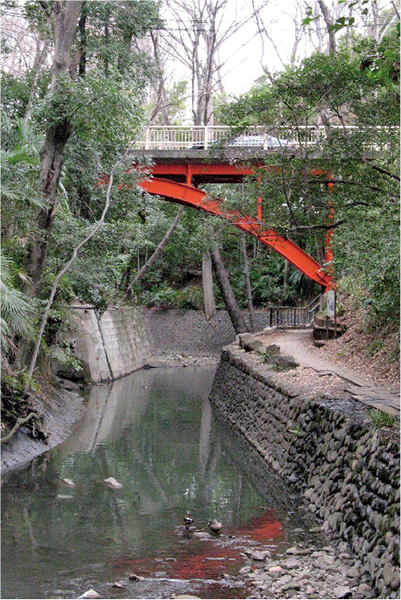 The Fudoson Temple of Todoroki enshrines the Buddhist divinity Wisdom King Fudo (Acala, the Immobile One). The official name of the temple is Ryugozan Myooin (The Hall of Wisdom King on the Mountain of Resounding Waterfall). A popular pilgrimage site, the Fudoson Temple was founded in the late Heian period (circa 1100)by the reviver of the Shingon Buddhist School Kakuban, the “Great Master of Establishing the Doctrine.”
During the late medieval Sengoku period, the Fudoson Temple became the tutelary temple for the Maita-Kira clan of the Setagaya Castle and villagers in the vicinity.
A scenic gorge runs below the hills on which the Fudo Hall stands in the temple. In the middle of the gorge right below the temple is a waterfall (Fudo-no-Taki Falls), a sacred site that attracts devotees from all over for their practice of ablutions and purification. It is said that the name Todoroki derived from the word todoroku (reverberate) for describing the sound of the waterfall there.

Together with Todoroki Valley, the precincts of the temple serve as a sanctuary of wild animals, birds and vegetation. The temple is celebrated for its splendors of cherry blossoms in spring and maple foliage in autumn. 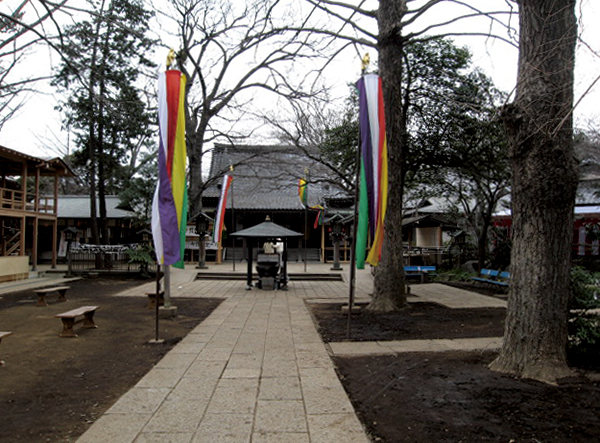 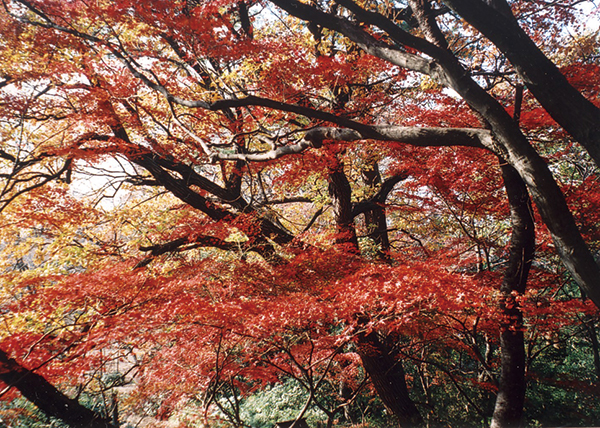 The Noge Otsuka Ancient Tomb, located in the Tamagawanogemachi Park near the Todoroki Valley, is a large, scallop shaped ancient tomb built at the beginning of the fifth century. It is the main tomb in the Noge Ancient Tomb Group, which in turn is part of the Ebaradai Ancient Tomb Group spread over what are now Ota and Setagaya Cities. The scallop shaped ancient tomb developed from the large keyhole-shaped tomb, with the front part becoming smaller to give it a scallop shell look when viewed from above.
The tomb is 104 meters long including the surrounding moat. The grave mound is 82 meters long, and has a rounded rear 68 meters in diameter and 10 meters high, and a front part 28 meters wide with one extrusion to its side. Four burial units have been confirmed in the burial mound, where much battle gear, etc. has also been discovered. The front part and extrusion had been scraped away, but have since been restored to their original state. The burial accessories, etc. indicate that the lord of the tomb had direct exchanges with the kingship in the Kinai region, which stood at the top of the political hierarchy at the time. It is believed that he was a great chieftain who presided over the small baronies in South Musashi (part of what is now Tokyo Metropolitan and the cities of Kawasaki and Yokohama in Kanagawa Prefecture).
The Todoroki Valley Tunnel Tomb No.3, this Noge Otsuka Ancient Tomb, the Mitakesan Ancient Tomb (Todoroki 1-18), the Kitsunezuka Ancient Tomb (Oyamadai 2-17), and other historical sites are distributed along the Kokubunji Scarp in the Todoroki Valley and its neighborhood. 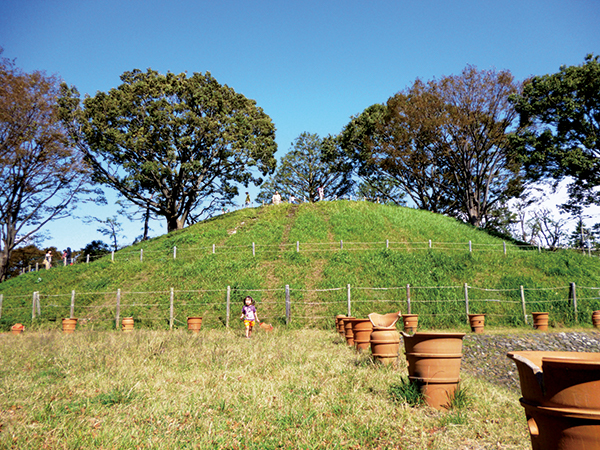 Downstream along the Yazawa River in the Todoroki Valley, on the other side of the river from the Todoroki Fudoson Temple, a hall dedicated to Aryacalanatha, is the shoin-style drawing room building built in 1961 and the Japanese garden that surrounds it. The garden has a pond, flowing water, and stone-paved paths, and retains the original landscaped created in 1973 by a renowned garden designer. It has a well sunlit lawn, which can also be used to take a rest during a walk along the valley.
There are bamboo groves and orange orchards around the garden, where the local Todoroki Valley Preservation Society conducts bamboo shoot digging and picking orange-picking field trips for children.
The Japanese garden and the shoin-style drawing room building are closed at night and during the Year-end and New Year holidays. 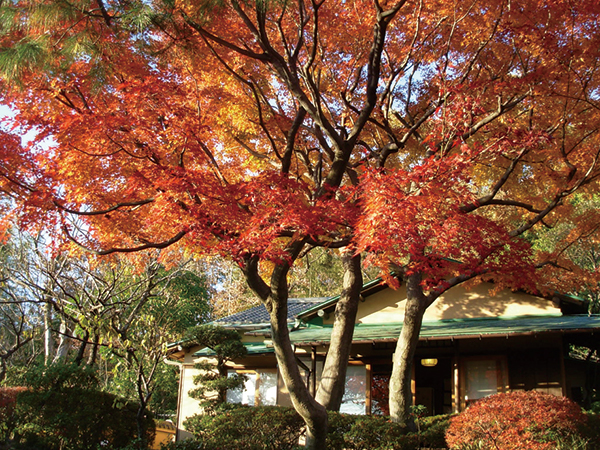 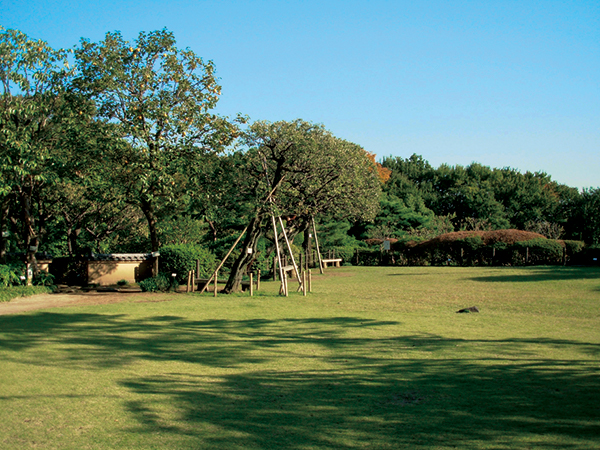 Six or more tunnel tombs on the eastern scarp of the valley have been discovered that were built between the late Kofun (ancient tombs) period and the Nara period (about seventh century). Measures have been taken to preserve Tunnel Tomb No.3 in particular, discovered in 1973, since it retained the prototypical form of the tunnel tomb and the corpse and burial accessories were in good condition.
The tunnel tomb is approximately 13 meters-deep, with an interior shaped like a tokkuri sake pitcher split in half. It is divided by a gateway constructed with tuff into a coffin chamber consisting of a burial chamber (where the bodies of the deceased rest) and passage and an approach leading to it. Sueki ware, both hirabe bottles and yokobe bottles, small knives, glit bronze earrings, etc. have been excavated from the tunnel tomb. It is presumed from the copious burial accessories that the people entombed in this tunnel group were prominent figures who ruled over the neighborhood of what later became Todoroki in Ebara Distruct, Musashi Province. 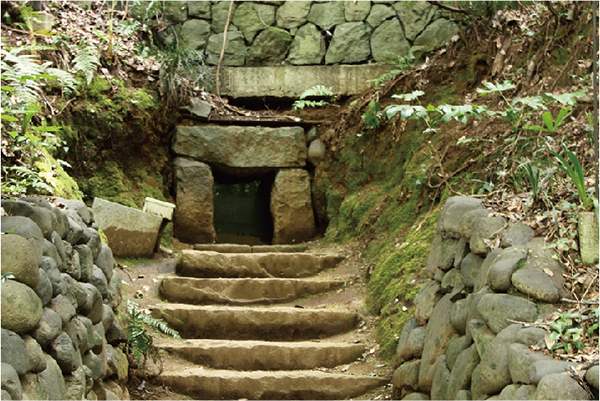