The Nakasendo was an important in land route linking Edo (modern day Tokyo) and Kyoto during the Edo period (1603-1867). Ota-juku prospered as the fifty-first post town from Edo along the highway. 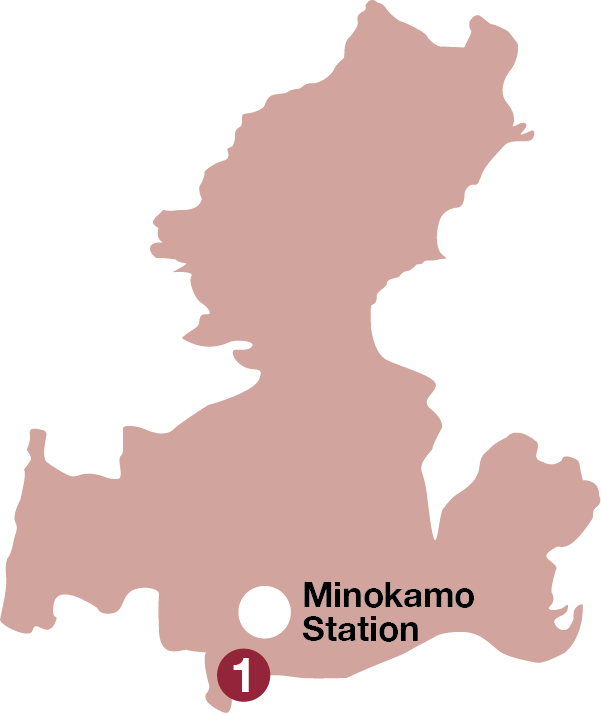 The Hayashi Family Residence was the second best inn in Ota-juku. It was authorized by the government for the reception and accommodation of high ranking travelers during the Edo Period. The building dates back to 1769. The original architecture and Edo Period ambience of this old inn has been well preserved, and it has even been designated as an Important Cultural Property of Japan. 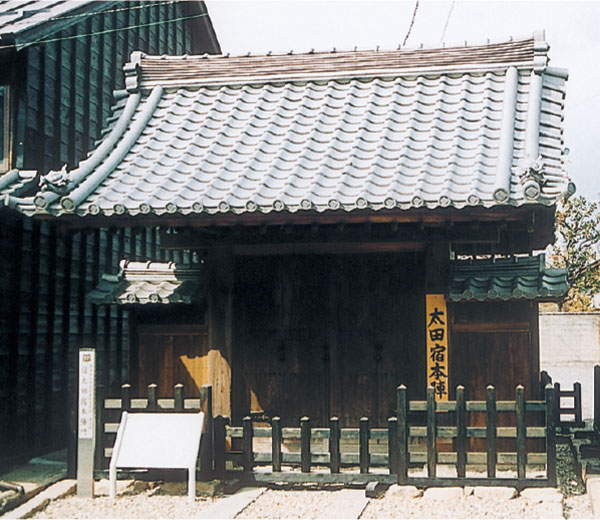 In 1861, this gate was built in celebration of the marriage of Emperor Ninko's daughter, Princess Kazunomiya, to the 14th Shogun, Iemochi Tokugawa. Approximately 6 feet across and built in the Yakuimon style, this gate features a large gabbled roof that covers a 3 foot wide fence on both sides. It is a significant piece of architecture, which adds to the majestic appearance of this former inn. 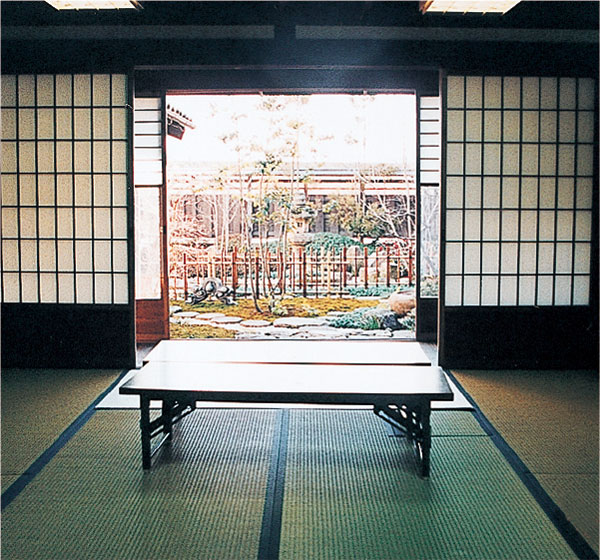 Built in the late Edo Period, Old Komatsuya was an inn used by travelers passing through Ota-juku. It now serves as a rest stop for tourists. 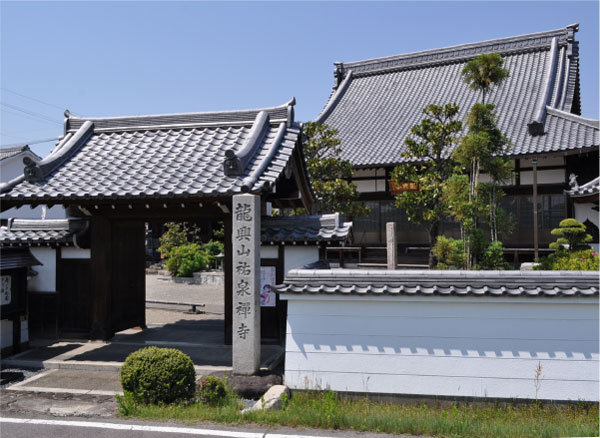 This Buddhist temple belongs to the Rinzai sect. It contains monuments engraved with internationally renowned haiku written by Basho Matsuo, the most famous poet of the Edo Period, as well as waka poems composed by the famous author Shoyo Tsubouchi and Hakushu Kitahara, who is regarded as one of the most popular and important poets in modern Japanese literature. The partial flagstone floor of an ancient river crossing can be observed along the Nakasendo Highway in Ota-juku. In 1994, a tract of fossilized trees was discovered at the bottom of the Kiso River, and the area was developed into a park. 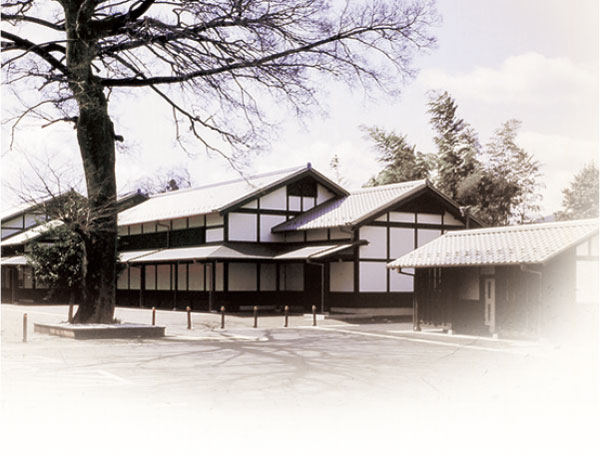 The Nakasendo Hall should be your first stop when you explore Ota-juku. A full-scale model of Ota-juku during the Edo Period, exhibits, and films can be seen on a regular basis in the hall. There is also a rest area with food and beverages, and a display corner where you can buy local products. 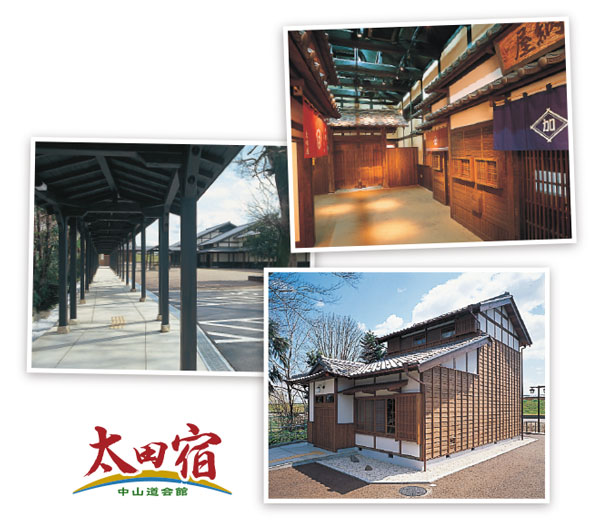 Address: 3-3-31 Otahonmachi Minokamo city
（Located on the west side of Old Waki-honjin）
Tel: 0574-23-2200 Admission : Free Hours: 9:00 to 17:00
Closed: Mondays（If a holiday falls on a Monday, the following Tuesday
is closed.）Year-end and New Year holidays.
Website: kaikan.ootajuku.net/

The complex network of land routes and waterways of the Kiso and Hida Rivers formed the foundation of economic wealth for Minokamo, advanced domestic cultural exchange, and created Minokamo's unique history and culture. 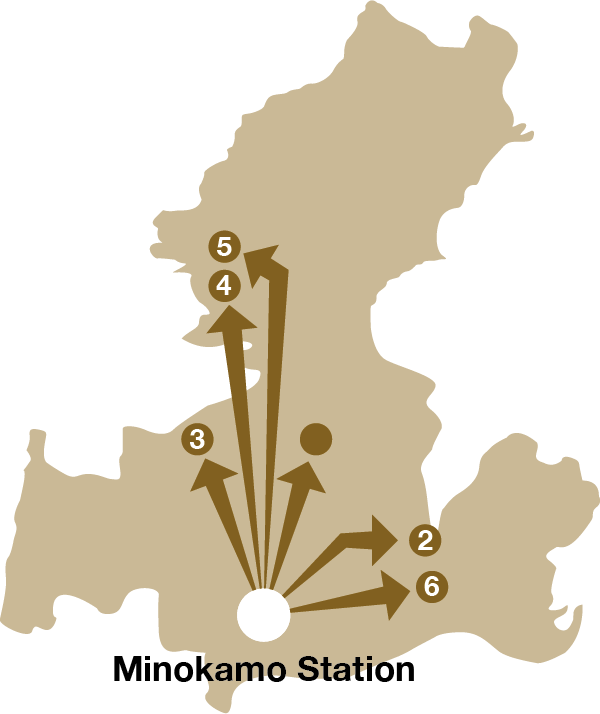 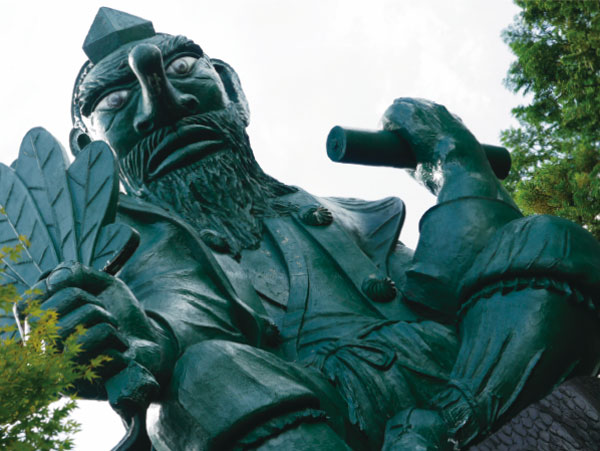 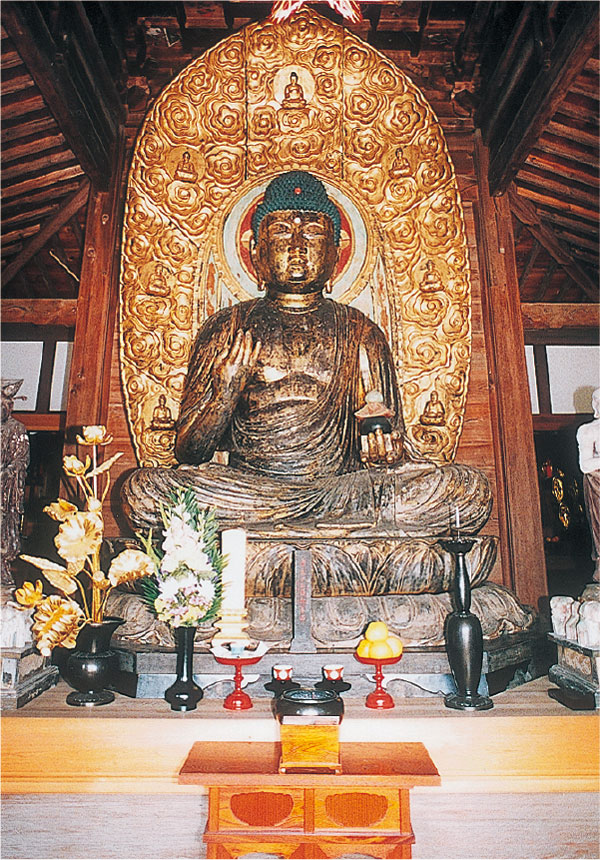 Zuirin-ji Temple has also been called "Persimmon Temple," an honorary title given by Yoshitane Ashikaga, 10th Shogun of the Muromachi Shogunate, upon the occasion of the presentation of their local specialty product, "Hachiya Dried Persimmons," This temple houses a number of cultural assets including a 481 centimeter tall wooden Maitreya Buddha statue (the Great Buddha of Hachiya.) 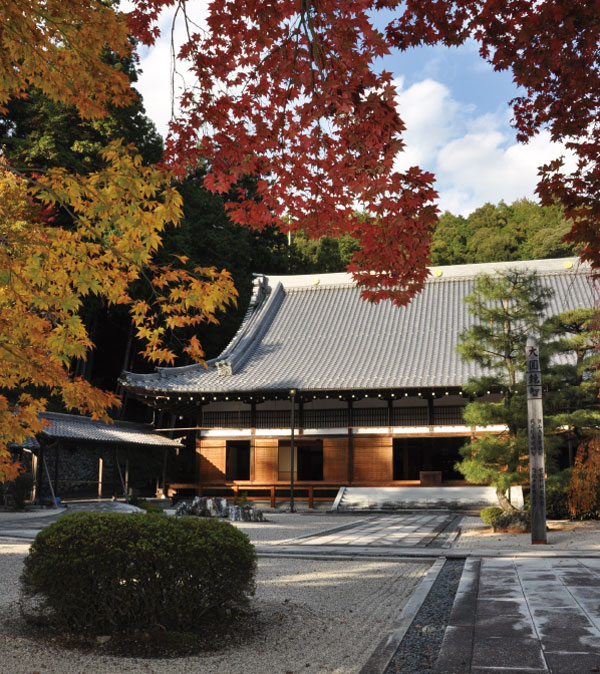 Established in 1330, this historic temple is well-known for strict Zen discipline. A number of famed sports personalities, economic leaders, and famous political figures have undergone Zen training at this temple. 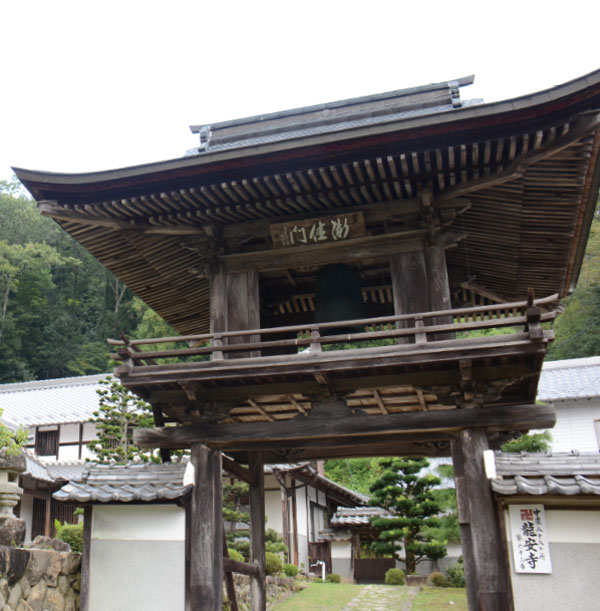 Ryouan-ji Temple is famous for the rare architectural style of its belfry gate. The old bronze bell from the 14th century, also called the "Goose Bell" (height 113 centimeters; bell diameter 60.5 centimeters), hangs from the top of the gate. This bell has been designated as a Cultural Asset of Gifu Prefecture as it represents the industrial art techniques of the late 14th century. This statue of the goddess Kannon, which is enshrined at the Koyama Kannon Temple on an island on the Hida River is believed to possess protective powers. It was erected for the protection of Yoshinaka Kiso's late mother, Wakana Gozen.

From the scenic plains along the Kiso and Hida Rivers, to the Yamanoue Plateau, to the deep-green, northern mountains, this area is perfect for enjoying the outdoors. The following locations are all within a 30 minute drive from the Minokamo Station 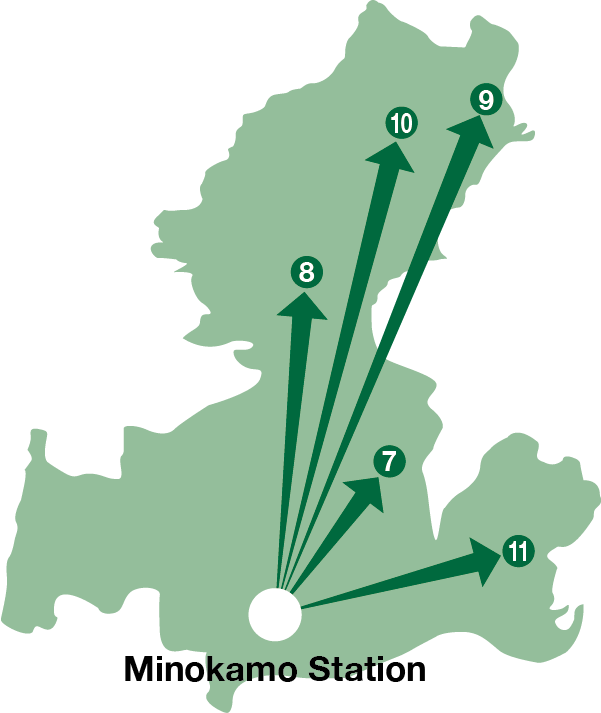 Established in the early 20th century, this time-honored fruit orchard currently provides you pear-picking opportunities. The fruit-harvesting season runs from mid-August to early October. You will enjoy feeling pleasantly refreshed just being in this large hill top fruit orchard. 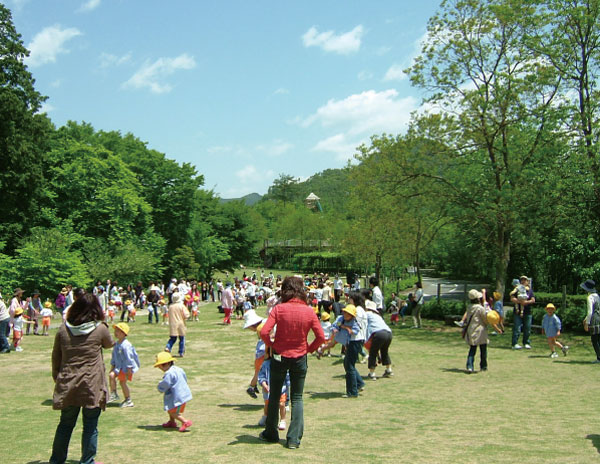 This enormous, 128-hectare recreational park and forest features a variety of free attractions, such as the 777 staircase observatory, roller slide, and athletic playground.
There are also barbecue facilities and a mini-golf course for family fun. 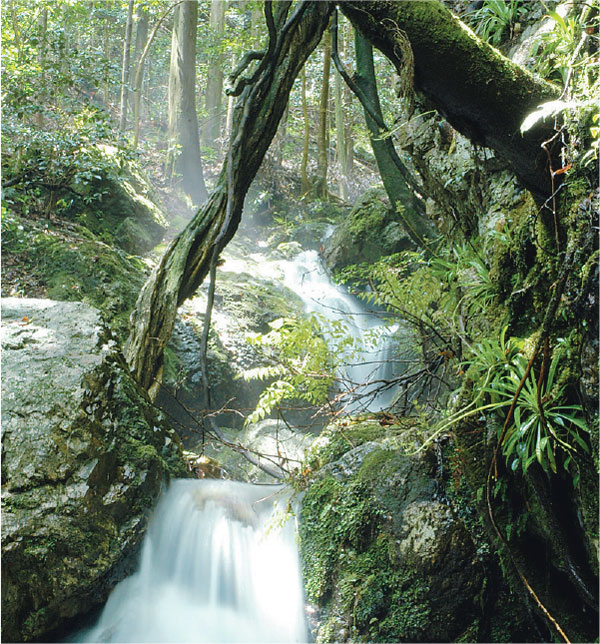 The Okuyama Nature Trail leads you to the top of Mt. Goten, the peak of the northern mountain region in Minokamo. Rapid streams run through the narrow gorge in the deep, mossy-green forest. Encounter spectacular waterfalls and beautiful scenery along the way. 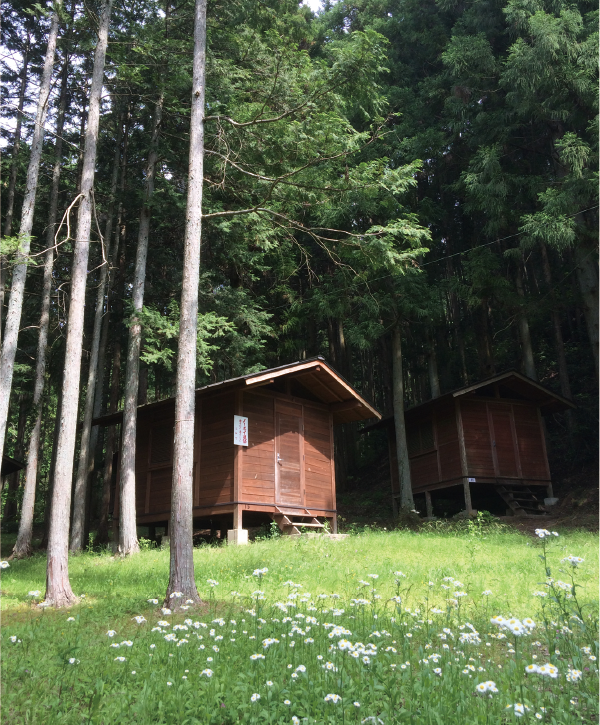 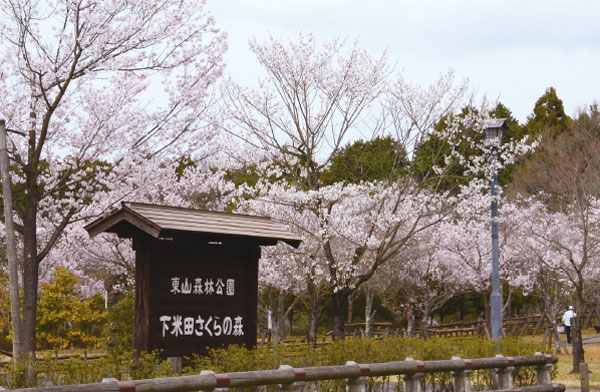 This 23-hectare park is a noted flower viewing site with a total of 5,700 flowering trees and 35 different types of plants. Weeping rosebud cherry, mountain cherry, Japanese Camellia, and Hydrangea are a few examples of flowering trees that can be seen at the park. Nakanoshima Park, where you can feel the history and nature of Minokamo City with your skin. “A park where you can both play and learn through your five senses” as its concept, along the Kiso River that conveys each season’s essence, and its’ focus being a “Port” that brings connections between people and nature transcending borders and generations. It has undergone a renewal. 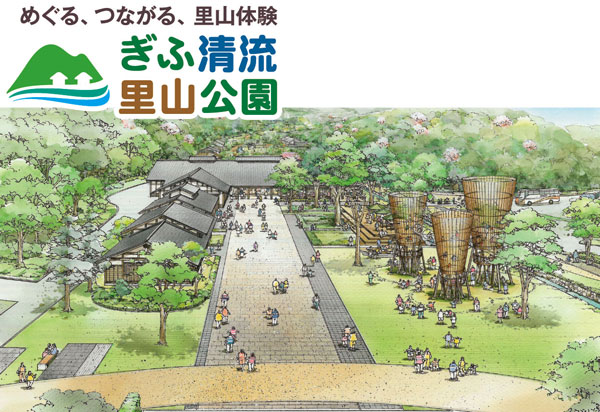 New facilities like Woodland Terrace / Woodland Cafe / Footbath have been added in the entrance!
New tools and treetop equipment to be installed from autumn and onwards. Fireworks like Starmine, Tezutsu (hand cannon) and etc. will be launched along with a performance of the Wadaiko drums.
The continuous launching of the Starmine at the finally is especially tremendously satisfactory.
Moreover, a Bon Odori Dance Festival is held after the launching of the fireworks. 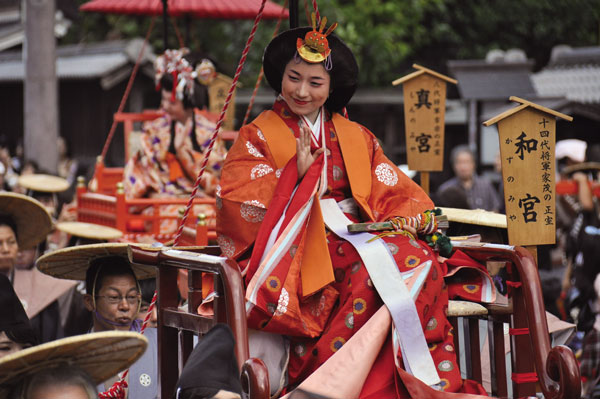 Centered on Princess Kazunomiya who was married to the 14th Shogun, Iemochi Tokugawa, a princess procession of over 100 people dressed up as the 5 princess brides of the historical shogunate, warriors and servants is held.
A crafted festival that covers you all day with a free market, stage events and a lively picturesque procession which introduces one to the world of history as its main event. 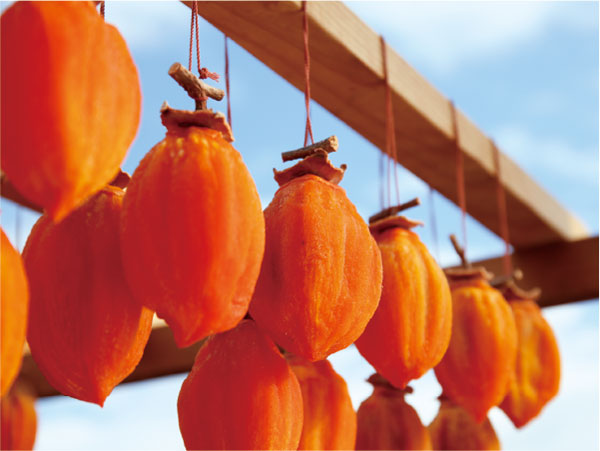 It is said that Dojo (noble) Hachiya Dried Persimmons have a history of over 1,000 years and were offered to members of the imperial court and successive shogunates. Dojo Hachiya Persimmons received the gold medal prize at the 1904 Louisiana Purchase Exposition. 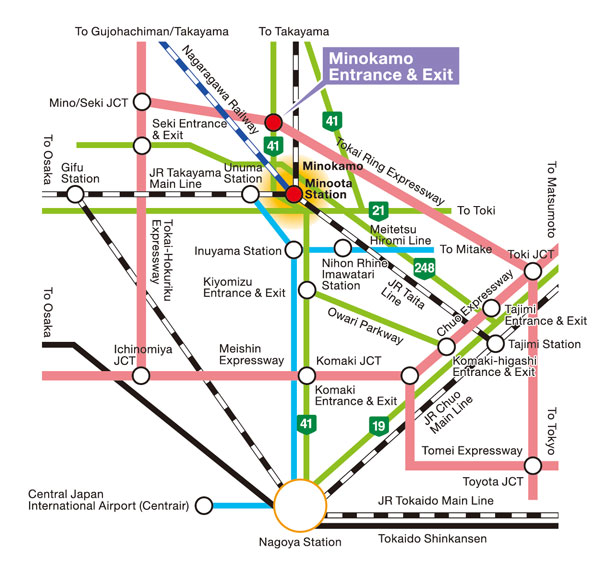 How to Get to Minokamo City Using Public Transportation

From Centrair
Take the Meitetsu Limited Express from Centrair to Unuma,
transfer to the JR Takayama Main Line bound for Minoota - 1 hour 10 min.